It's the age old argument of car fuel efficiency. Years ago, diesel fuel was more expensive, but lasted longer and gave you more miles per gallon. Petrol, whilst less efficient was quite substantially cheaper and the cars themselves were less expensive to buy. Now? Well let's be honest, both fuel prices are far above what they were in the good old days. We have to pray to the motoring Gods for a crash in the oil market or a Black Friday sale (thanks Asda) to get either below the pound.

Enter the Toyota Prius. In 1997 the Japanese manufacturers developed the world's first mass-produced hybrid car, with a combination of gasoline and electric capabilities. Contrary to popular belief, the minds at Toyota didn't create the hybrid concept, with vehicles that contained both an internal combustion engine and electric motor dating back as far as 1898, but this was the first instance in which it was mass produced and readily available. In truth, it was a car for the green-fingered driver, offering low-emissions as well as efficiency, but by todays standards it has struggled to keep up with the likes of BMW, Mercedes-Benz (minus last years emissions hiccup) and Audi for cost-effective travel that combines style and power at the same time. The Prius averages at between 40-50 mpg for standard highway mileage, whereas a BMW 620d will get you upwards of 60mpg. And if I'm honest, you'll look a bit cooler doing it.

All this was new, unfettered ground until 2003. In the background lurked Elon Musk and his crew at Tesla Motors. Utilising technology from Nikola Tesla's 1882 AC motor design, in 2008 they released the all-electric Roadster, the first production automobile to offer a fully electric car with a range greater than 200 miles, and since then the technology available has come on leaps and bounds. This is all at a somewhat greater cost to the consumer, as the initial base-price for a Roadster was £86,950 compared to the Prius. As time has gone on, and other manufacturers have got involved (Nissan Leaf or Renault Wind, anyone?) however, this price has decreased substantially, and the appeal to the average car-buyer has increased as a result. Their forecast for the next US release is scheduled to be at just $35,000!

So what does this mean? Could we see the fall of motoring giants like BMW and Mercedes in favour of the new kids on the block Tesla and their fierce rivals Farraday Future? Or will we see a sudden increase in new car releases as other companies try and keep up with new tech? And for those of us left behind with classic combustion engines, will we finally get a fuel price like we did 10 years ago? Let us know your thoughts in the comments below!
Posted by Essex Social Media Consultancy at 06:28 No comments:

Our constant fascination with convertibles

Summertime. Hot weather, ice creams, beaches and swimming in the sea, shorts and sandals... at least, that's the case if you live somewhere like Mauritius or Florida. Here in the UK, we do get summer weather, but only for about 3 days (give or take). So with that said, why are we as a nation so fascinated with convertible cars?

I used to love rollercoasters as a kid, but my parents would only take me on rainy days so that we wouldn't have to spend most of our time in the theme park queueing. It's the memory of rain lashing at my face like thousands of tiny daggers as the ride roared around the track that has convinced me that in such a wet country, a convertible really isn't the product for me. Looking at the figures, however, it seems a large portion of the country disagrees with me. We actually buy more convertible cars in the UK than Spain, Italy and France.  In fact, we only lose out on the top spot to our German friends over in the land of BMW and Audi.

There are 2 main reasons why Brits love a top-down car. The first one is the statement. When Audi conducted a poll of their convertible drivers, 46% of them admitted to being more interested in the style of it, than actually driving with the top down and the sights and smells that come with it. Looks like we're quite vain Britain! But that's not the only reason. When we get 3 proper sweltering days of true sunshine, we do 3 things. We get the shorts out of the box on top of our cupboards. We wrestle the BBQ out of the shed. And we get the roof down on our convertibles. It's important as a brit to ensure that we squeeze every last drop of British summer out that we can until we gallivant off to Spain in September-time.

I'm not a convertible convert yet, but I'm beginning to see the appeal. So what do you think? Are convertible cars a fancy addition to a collection worth having for the sunny days to really experience the drive and make it more exciting? Or do they have no place in a country where sunny days are as frequent as shooting stars? Let us know! 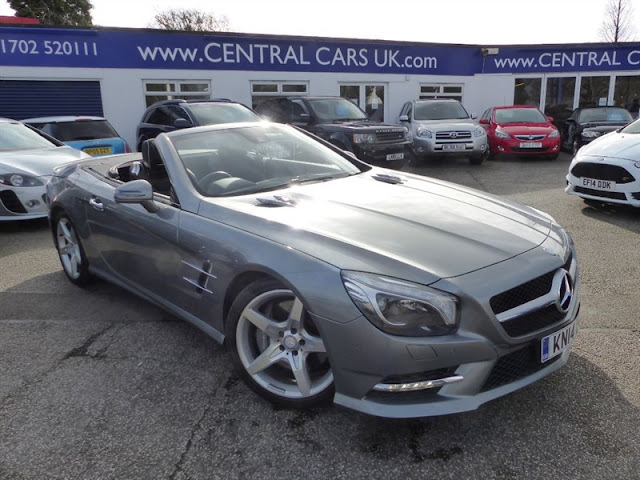 Time and time again we get asked whether or not we take in people's cars as part-exchange. Much like a number of other car dealerships, the immediate answer is yes, given that the majority of people will be trading in relatively recent cars. But at Central Cars UK, there's a difference!

We will take in anything. Literally any car that's presented to us in working order and can be driven on and off the forecourt is game for exchange. I know what you're thinking. "That's what most dealerships say, and then I get there and they don't want it." Well, take a look at this Jaguar that we took in a couple of months ago: 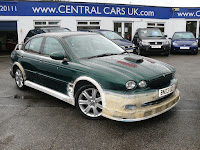 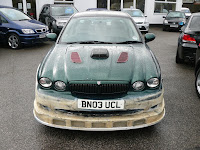 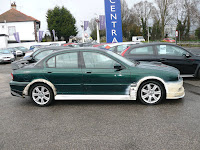 Yes, those are plastic gutters from a roof being used as side skirts. No, this isn't the prettiest car we've ever had. And yes, we did manage to sell it- to a group of guys doing a Cannon Ball run across Europe for charity!

So don't sit at home staring at your driveway with despair and wondering what you're going to do with the old motor. Just bring it down to us, and we'll take it from there!
Posted by Essex Social Media Consultancy at 10:30 No comments:

Here at Central Cars UK, we understand that your ideal car is unlikely to be sitting on a local lot just waiting for you to snap it up. Even if it is, it's not always convenient for you to make the purchase there and then (you may have to go home and talk to the other half first!). By the time you're ready, it's probably gone. Let's be honest, if it's your dream car, it's probably someone else's too.

So what do you do? Put it down to bad luck, forget about it and always remember it as "the one that got away?" Settle for something less? Not with Central! We believe that you should never have to settle for less, so we go the extra mile (excuse the pun) to get you the motor you crave! We've been sourcing individual cars for our loyal customer base for the last 20 years! Using our vast network of automotive trade partners and friends, we have travelled the length and breadth of the UK to collect 'hand-picked' used cars to bring back to our showroom, ready to deliver to another happy customer.

So how does this work? Well, if we don't have what you want in stock, we use the requirements and specifications of your desired car and then look through our partners' databases until we find a match for what you want. Think online dating, but for the motor industry. Once we've seen the car you're after, we contact you straight away to let you know the price, mileage, owners, service history and the turnaround time for delivery- sometimes it's only a couple of days! Once we've agreed and accepted a price for your new vehicle, one of our team of drivers jumps on a plane or train and goes off to make the purchase and collect the car before bringing it back for you. If required, we service and MOT the vehicle before handing it over to you complete with a 3 month warranty and 12 months AA Roadside assistance!

Sound simple enough? Come give it a try! Let us know what you're after - we've got it covered from there.

Posted by Essex Social Media Consultancy at 10:06 No comments: